To explain the concept of consumer equilibrium the price of the two commodities should be given as well as the customers‟ income so as to derive the budget line. Budget line is a curve or a line showing combination of two goods that can be afforded with a given level of income. A consumer will be at equilibrium where the budgets line is a tangent to an indifference curve as shown in Figure 3.7. 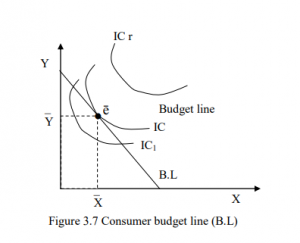 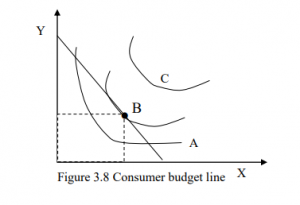 Point B is the equilibrium point where the consumer is maximizing the utility subject to his budget constraint. At point A the consumer has unutilized income and cannot derive maximum satisfaction. Point C is an attainable since the consumer’s income is limited by the marginal rate of substitution at the point B which is also the slope of budget line.