This school of thought is opposed to the law that utility is measurable through cardinal numbers. This school of thought maintains that customer behaviour can be explained in terms of preference so that customers need to state the commodity they prefer without assigning numeral values without the strength of their preferences. Consumers are expected to value their preferences of the entire service market of goods and service in order to choose i.e. combination of two goods that can be chosen if the two goods are ranked. This is explained by the use of indifference curves. The assumptions of this approach are:

1. Price of goods is constant
2. Consumers are rational
3. Consumer can rank his/her preferences over time
4. Their behavior must be transitive i.e. if a consumer prefer A to B to l C then he can prefer A to C (axiom of transitivity)
5. Customer always prefer more to less of every commodity (axiom of non-station)
6. The slope of indifference curve gives the marginal rate of situation (M.R.S)
7. The consumer is able to order all the available combination (axiom completeness)

Indifference Curve
This is curve joining together all different combination of two goods that yield the same amount of utility to a consumer. It is a locus of point of possible combination of two alternative good that yield the same level of utility. The shape of indifference curve is called the marginal rate of situation (MRC) i.e. the rate at which good Y can be substituted for by good X leaving the consumer at the same level of utility. 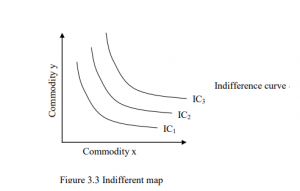 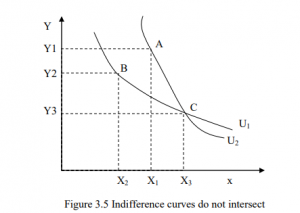 3.They are convex to the original This implies that if the slope of indifference decrease in absolute terms as we move longs the curve from left downwards to the right therefore the marginal rate of the substance will be decreasing or diminishing as show in Figure 3.6. 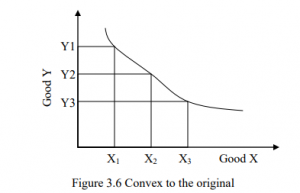 The theory of diminishing marginal rate of substitute expresses the observed behavior that as people consume more of a good, the utility they gain from each excessive unit decline. As the number of units of X the customer is will to sacrifice in order to obtain additional unit of Y decrease as the quantity of Y rises. Therefore it is difficult to substitute X for Y as the customer consume more of y and vice verse.